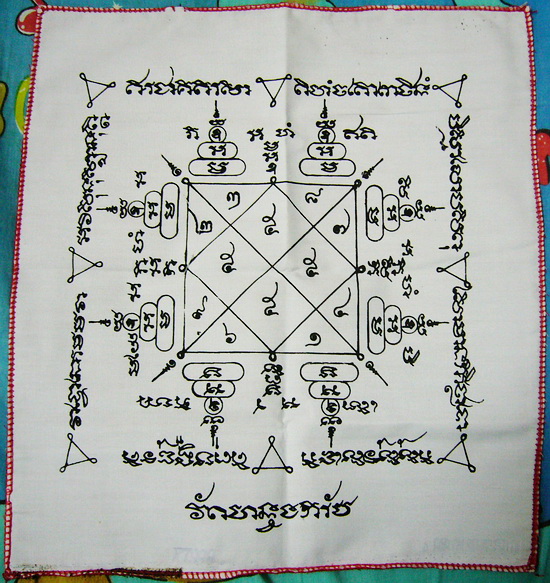 These spirit cloths, known as pha yant (ผ้ายันต์), are often framed above doors or mounted on walls in public. Pronounced “phaa yan”, the words translate to “cloth” and “sacred diagram”, and is described in English simply as spirit cloth.

Many older or rural Thais, and even some cityfolk, have one or more neatly folded pha yant in their wallet or purse, hoping it will keep them safe wherever they go. Traditionally, Thais journeying from their hometown on vacation or business would even bring a few extra pha yant with them, especially one which safeguards travelers. 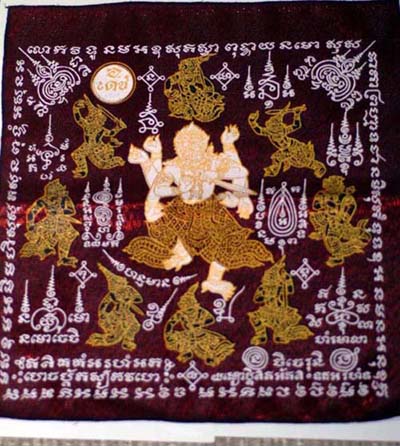 Pha yant can include portraits of exalted people, humanoids or beasts. Sometimes they’re just squiggles and geometric patterns peppered with numbers, letters and secret codes drawn from ancient Sanskrit, Pali, Khmer, Thai and other languages. Incantations encoded along the horizontal and vertical borders can include script which only masters and adepts can correctly interpret. The woodblock illustrations also appear printed on paper and pasted above a doorway facing the street where, exposed to the elements, they deteriorate over time. 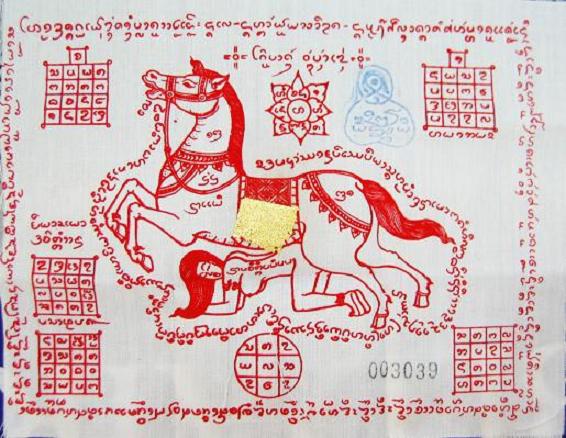 Unsurprisingly, some pha yant are designed to work some love-sex-magic, such as a popular illustration known as Maha Saney, which depicts a woman copulating with a horse or other animals.

Believers sometimes rub a pha yant on their head or body, hoping to soak up the spell. Othertimes, people might soak their pha yant in perfumed prayer oil or holy water and allow it to drip upon them to shower in its concentrated mojo. Although we won’t be liable for what you find there, you can also meditate upon a pha yant’s patterns until it creates a keyhole to another realm. The cloth can also be wrapped around a candle and burnt in a ceremony. Freakier rituals include rolling up a pha yant and stuffing it into the mouth of a dead fish while chanting and performing other equally puzzling acts.

If you want to own a pha yant, many Buddhist temples offer them in exchange for a small donation, and each temple’s illustration is unique. Bangkok’s amulet markets sell stacks of inexpensive pha yant in bulk, sealed in plastic bags, for easy distribution. 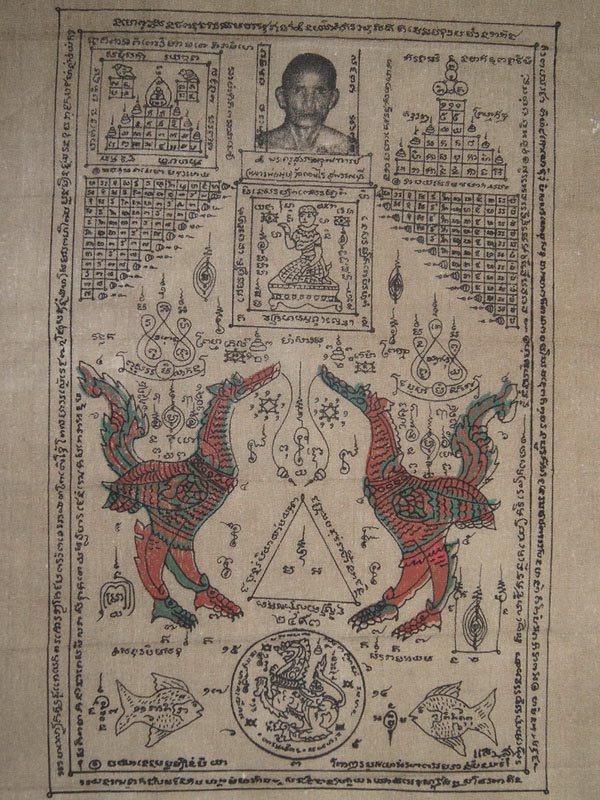 Some speculate pha yant appeared centuries ago among soldiers who carried the cloth or wore magical undershirts emblazoned with the designs. Their use was quite practical: as protection on the battlefield or to cast crippling spells against enemies.